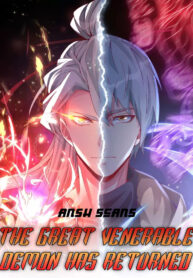 Read The Great Venerable Demon Has Returned Translated by anshscans in high quality at mangacultivator.com
Zhang Yi was a tragic teenager Robbed of his girlfriend by Hu Tianhua, he was even swindled into taking on millions in debt, so that his father had no choice but to sell off their family property.Finally, his father died of cancer, overworked to death.

But when Zhang Yi abandoned all hope and committed suicide, not only did he not die, but rather encountered a blessing in disguise:
He transmigrated into the Ancient Immortal Continent and born with great abilities. His rise was unstoppable. With heaven-defying cultivation, he rose to the position of the most supreme Demon God in just a few years. Trampling on the 18 layers of asura hell while wearing the 36 layers of heaven on his head like a crown, he still met his doom.Since he was in possession of an immortal treasure, the heavenly book of transformation, the so-called righteous people ganged up on him in a surprise attack.Finally, it ended in mutual destruction.

But after his death, Zhang Yi returned back to Earth, back to the time when he was attending university.