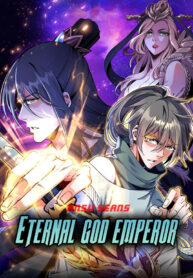 Eight hundred years ago, Ming Emperor’s son, Zhang RuoChen was killed by his fiancee, Princess Chi Yao. And so, an era’s bright star has fallen.

800 years later, Zhang RuoChen came back to life… Only to discover that the fiancee who had once killed him had already unified the Kunlun Realm! She founded the first Central Empire and was known as the Chi Yao Empress.
Standing outside the Emperors’ ancestral hall, Zhan RuoChen sees Empress Chi Yao’s statue and roaring flames of hatred rise in his heart:
“In 13 years, after I finished preparing, you can call yourself Empress in the Underworld!”

The Ultimate God Of War